The UK’s Darwin Initiative funded a three-year project in 2006 led by London’s Natural History Museum in La Amistad International Park, Naso territory.  Some 12,000 species from two continents were documented, more than two dozen new to science.  Shortly after this first and only scientific exploration of the Rio Teribe watershed, a hydroelectric developer brought the first heavy equipment, roads, bridges, and dynamite to one of its key tributaries. The Naso have been recognized by United Nations Environmental, Scientific & Cultural Organization (UNESCO) for their sustainable stewardship, but their territory is under pressure from all sides. 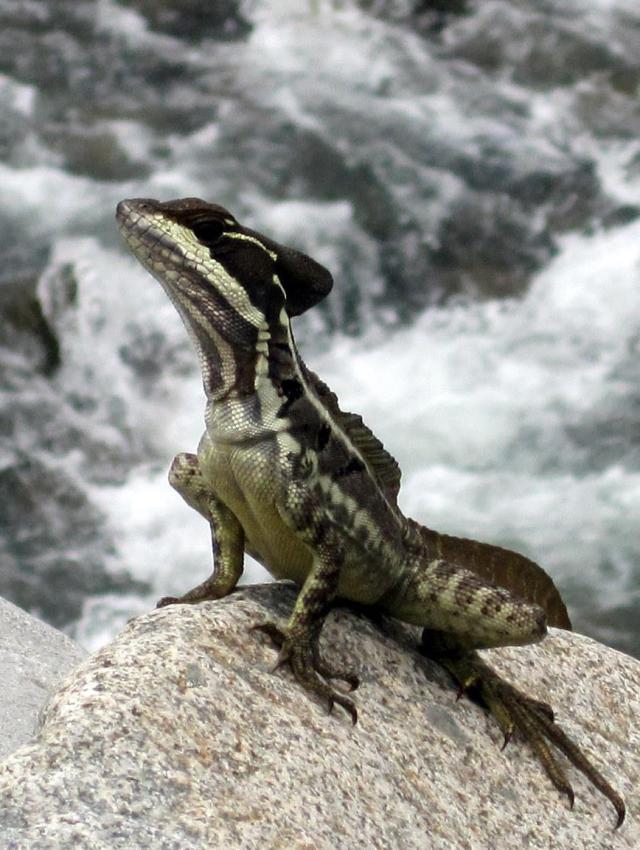 Two kings have now been exiled for failure to conserve their democratic kingdom where all leaders must come from the ruling Santana family. Like his Uncle Tito before him, Rey Alexis was forced to leave the royal palace last month for failure to respect the will of a supermajority of his people who want comarca status to conserve their ancestral territory. A new election is set for November 30th.

I first met with Naso leaders in 2007 as they developed an Organization for the Development of Sustainable Eco-tourism for the Naso (ODESEN). The Big River Foundation (BRF) works with ODESEN to bring groups to the Naso biosphere reserve for “Watershed Watch Expeditions” to explore the pristine Rio Teribe watershed by hiking and kayaking to study an increasingly rare intact river ecosystem.

We shared the Naso’s heartbreak when former king Rey Tito Santana betrayed the wishes of his people. He granted a hydroelectric concession to a Medellin-based consortium on the Naso’s Rio Bonyic. He was immediately deposed by a supermajority of his people and lives in exile to this day.  The people voted Rey Valentin to replace Tito, but Panama’s National Assembly would not recognize Rey Valentin until the Bonyic project was near completion, knowing he would have cancelled the concession.

In 2012 the National Assembly finally recognized a new ruler, Rey Alexis, the youngest Santana in Naso history to rule this tribe of 4,000 people. The hydroelectric consortium immediately co-opted him, so the people ousted Alexis from the royal palace just like his uncle Tito. With developers ready to install a 2nd project on the Naso’s Rio Shey, this is a critical time for the Naso, who are presently electing a new king, this time with the specific charge of petitioning for a Naso Comarca in 2014.

After years working together to develop ecotourism in their region, we have established a solid working relationship with ODESEN leaders. They now request logistical, tactical, financial, and professional assistance to file a formal legal petition to create an autonomous Naso Comarca to protect their Rio Teribe at the watershed level, 160,000 hectares.  They need a professional presentation for the first debate with Panama’s legislature in 2014.  We advocate strongly for the Naso to join the other tribes in Panama already recognized with Comarca status, to include an area sufficient to conserve their watershed with an adequate buffer zone. We have helped ODESEN leaders appear before the Inter-American Commission on Human Rights (IACHR) in Washington DC; the Commission supports the Naso position.

Leaders of all twelve Naso villages are organizing in advance this time, to avoid a replay of conditions that led to the first hydroelectric project.  We are constant contact during this planning period. The habitat of La Amistad was recognized as a World Heritage Site because it comprises a land bridge for migratory and other species from two continents, sandwiched between two seas. It is too important to fall to corporate for-profit development, as is the case with hydroelectric developers under SIEPAC, the interconnection of Central American power grids. This is a private plan to export electricity by harvesting public rivers in Central America and transmitting as north as far as Mexico under the Pueblo-Panama Plan. This may be the largest heist in the history of man. Water is life.

Panamanians recently demonstrated that they stand with the indigenous against the development of natural resources in their autonomous territories. This was evidenced by President Martinelli repealing a mining investment initiative (2011’s Law 8) after his administration’s polls showed 70% of voters against exploitation by foreign corporations of natural resources in the cloud forests of the Ngobe-Bugle Comarca.  We have shared this encouragement with Naso leaders and are producing a documentary film short to share the Naso’s plight internationally; it is in final editing.

Naso is the last intact indigenous culture in Panama without autonomy to conserve their territory. The Naso expect that a conservation set aside will be granted, and this is one of four goals for the New Year:

The Naso have witnessed massive extinctions on the Rio Bonyic where this tributary meets the Rio Teribe as a result of the first hydroelectric project. No longer do freshwater crabs, shrimp, or fish grow in the tributary to find their way to the main river. Birds no longer feed there. Species die-off will be quantified with empirical data to further document the case against a second project on the Rio Shey. Data will be compared between the two tributaries to illustrate the effects of hydrological disturbances in the Naso watershed.

3. Craft a presentation with a large map of the Naso’s ancestral territory showing boundaries of UNESCO’s World Heritage site known as La Amistad, its buffer zone known as the Palo Seco Forest Preserve, and Bocas del Toro province at El Silencio. This map will highlight the proposed autonomous territory for the Naso Comarca showing their 12 communities along the Rio Teribe . The longstanding Naso Conservation Management Plan will also be made available to National Assembly members.

4. Advocate throughout the process for the Naso’s petition to join the other indigenous cultures on the isthmus with their own Comarca, inviting testimony from UNESCO, Smithsonian Tropical Research Institute, IACHR, the Big River Foundation, ODESEN and Naso Leaders. We hope to fund Naso leaders travel expenses to and in Panama City as needed during this process, and to facilitate legal counsel.  The first trip for the new leader and his team will occur immediately after his coronation.

The Naso worship “Tjër Di” as their Grandmother Water, literally the water in the Rio Teribe, as a sacred deity, she who nurtures Mother Earth who provides for us all. She provides everything the Naso need to sustain their culture – water, food, transportation, eco-tourism, recreation. Cultural genocide would be the result of the death of Grandmother Water, of the Rio Teribe being made unnavigable, according to testimony before the IACHR.

We have a grant application pending with the United Nations Rapid Response Facility to support this Naso initiative. Donations also help us to provide the level of assistance needed and are tax-exempt under IRS code 501(c)3. There are four ways to lend your support to this cause:  Visit BigRiverFoundation.org and click “Donate Now” at the top right; make direct contact in Panama at +507 6966-2691; arrange a tour to present your contribution directly to ODESEN leaders; and/or, share this story. For more information, see earlier Rio Teribe posts.

“May what I do flow from me like a river, no forcing and no holding back, the way it is with children.” – Rainer Maria Rilke