Leadership remains the focus of organizational meetings for Naso autonomy, the subject of public hearings before the Inter American Comission on Human Rights (IACHR) in Washington D.C. next week, “The Right to Property and the Right to a Healthy Environment of Indigenous Peoples in Bocas del Toro, Panama.”

Naso students returned to school last month and we’re delivering donated school supplies on our next visit. Anyone wanting to visit the Last Kingdom in the Americas can join us for an Easter Weekend Expedition. Detailed updates on these initiatives are the subject of this blog post.

Naso leadership remains contested as the people will retain no leader who fails to advance a petition for the Naso Comarca. The other five indigenous groups in Panama have received Comarca status – an autonomous district. With this excellent record on indigenous rights in Panama, there is every reason to believe the National Assembly will respond positively to a formal legal petition brought by its remaining tribe existing in political limbo. Rey Alexis Santana failed to advance such a petition and is in the process of being replaced by the Naso people.

A Big River Foundation documentary film short describing the Naso’s battle against new conquistadors coveting their resources is scheduled for its first public screening in Boquete March 28th at 3:15. We’ll ask those who agree with the film’s goals to sign a petition to Panama’s National Assembly to put stewardship of the kingdom’s watershed into Naso hands. We hope to see many of you at our film screening!

UNESCO has recognized the Naso’s excellent stewardship of the part of the World Heritage Site “La Amistad International Park” where they have lived for more than 1,000 years. ANAM, on the other hand, granted a concession to a Colombian-led consortium to ravage the Naso’s Rio Bonjic for a 30 MW hydroelectric project. This river is within the Palo Seco Forest Reserve which is a buffer zone between La Amistad and Bocas del Toro. The Bonjic project will come online later this year.

The Rio Bonjic feeds the Rio Teribe, the primary river in La Amistad. This river’s water is a mystical goddess to the Naso, providing everything they need, including navigation between their 12 riverside communities. If the river’s flow is lost to reservoir evaporation, or to bottling projects or other private uses, it will end the Naso way of life and one of the most intact and pristine watersheds in the hemisphere.

ANAM’s Bocas del Toro office states there are no plans for future destruction in the biosphere preserves that are Naso Territory. Yet studies for additional projects have been conducted and filed. The Naso have no confidence in ANAM, an environmental agency that destroyed forests inside a forest reserve which they have protected long before Panama existed.

The Naso have schools in half of their 12 riverside communities, each with about 30 students on average. One community, Sieykin, has requested school supplies. This is one of the communities we visit most often. Parents from the other schools need assistance as well. Having just purchased textbooks and school supplies for two daughters in Panama, we know this runs $200 per student.

Our goal is to provide half this amount per Naso student. We have placed a donation box at Mike’s Global Grill in Boquete. Naso students need the usual:  Notepads, pencils, colored pencils, sharpeners, construction paper, pens, crayons, scissors, rulers, and backpacks. Cash donations for textbooks can be made in envelopes marked “Naso Schools” via Heidi Rehm at the Global Grill. All deductions are tax-deductible in the USA as the Big River Foundation is a 501c3 educational charity. 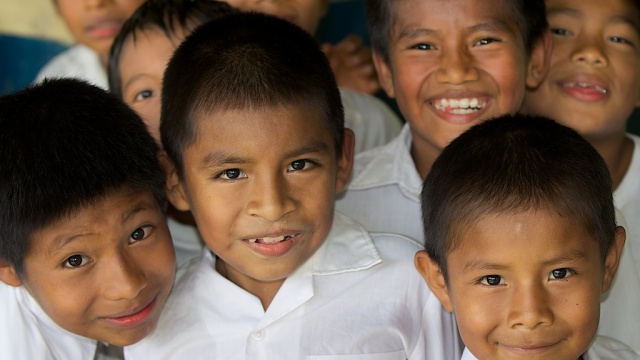 You can tour the last kingdom in the hemisphere. It is a democratic kingdom because unsatisfactory leaders can be replaced by the people, but any replacement must come from the ruling Santana family. Only two kings have been deposed in the history of this democratic monarchy, both for accepting the hydroelectric project that has damaged the Naso watershed. The favorite to lead the Naso Comarca is Maestro Santana, superintendent of the schools.

Our next trek is April 3-4-5 to Wekso, the Naso Eco-lodge. Those wishing to join this visit with Grandmother Water and her people can email for details.