News from the Rio Teribe

Our Naso friends in the last kingdom in the western hemisphere are having a difficult time with politics. You see, they are also the last indigenous tribe in Panama without autonomous territory, which Panama calls a “Comarca”; they are a river tribe whose ancestral territory includes untold natural resources in an UNESCO World Heritage Site that is a one-million acre international biosphere reserve; and, they are a democratic kingdom. In the Naso monarchy, all rulers must come from ruling Santana family.

It is this last component that is proving difficult. For a background on the king that was exiled for betraying his people to a hydro-electric company, please see previous blogs. Panama’s National Assembly would not recognize the king elected to replace the traitorous king. They could not … the government had given a concession to Medellin-based EPM to dynamite a 2-mile tunnel into a Naso river, against the wishes of a super majority of Naso people. Corporations seeking energy, lumber, and ranch lands continue to covet the Naso territory including International Park La Amistad shared by Costa Rica & Panama. Costa Rica is set to import electricity from the Naso’s Rio Bonjic; the transmission lines already cross the border along Naso territory… and Mexico’s Carlos Slim, richest man in the world, proposes connecting them to the grid for Mexico’s D.F, picking up electricity from 54 dams throughout Central America. The territory of the smallest of tribes is sought after by BIG business, revealing a global problem with a group of corporations franchising everything from seeds to energy to water. 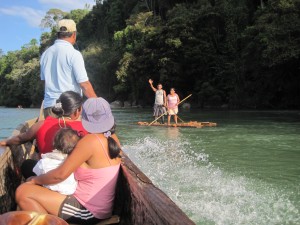 In Jan. 2012, with the Bonjic Project nearing completion, the new King Reynaldo Alexis enjoyed both his coronation and recognition by Panama’s National Assembly (unlike his predecessor). In a recent interview, Rey Alexis shared with me his two primary goals: a Naso Comarca and the termination of plans for any additional hydroelectric projects on the Rio Teribe or its tributaries. These two initiatives enjoy popular support by the Naso people who rely on their river for water, food, and navigation. For the Naso, this river is the mythical goddess Grandmother Water who nurtures Mother Earth, who nurtures us all. One reason Rey Alexis was chosen as the youngest king in Naso history above the elder teacher, Maestro Santana, is that this young prince comes from the only political party that actively opposed the Bonjic hydroelectric project from the beginning; his party actually opposed the concession his rogue family member sold for a pittance.

Naso commuters greeting heavy equipment preparing materials for a 2-mile tunnel being blasted into a tributary with heavy explosives.

Now tribal leaders and their community members are concerned that a year has passed with no documentation of progress toward their goals. The people are concerned because tribal leader Adolfo Villagra recently returned from the Inter American Commission on Human Rights (IACHR) in Washington DC to report that Panama’s national government responded to an IACHR complaint writing that the Naso Comarca was “in first debate”. First debate begins the process to make a bill a law in Panama. The people are waiting for their representative to issue a notarized letter along with a copy of this documentation to the National Assembly, demanding they make good on their claim to begin the Naso’s legal march toward autonomy.

When Naso neighbors, the Ngöbe-Buglé tribe, made this same demand to a previous administration, Panama did the right thing and returned autonomy over a land area representative of the tribe’s proportion of the national population, almost 10%. So, not only does the precedent exist six times over, there is a very recent precedent in law. This was 1997. There is a Naso Assembly meeting regarding their own Comarca initiative in two weeks. Their goal is to push for written action. President Martinelli knows this, and he could solidify his favorable reputation for indigenous rights by adding Naso autonomy to his legacy, the last Comarca for his nation. This would be a fine follow-up to his recent stance repealing the law that would have turned the Ngöbe Comarca into an open pit copper mine leaching chemicals into Panama’s watersheds and seas, all to benefit a Canadian corporation representing the government of South Korea.

In the meantime, the Naso are concerned for three new reasons. First, the king recently ordered that only village leaders initiate petitions. This makes a nation-wide petition impossible unless all village leaders coordinate, and it prohibits Mr. Villagra’s organization, ODESEN, from initiating such a survey to document the wishes of the people. ODESEN is the Organization for the Development of Sustainable Eco-tourism for the Naso. Second, there has been discussion about the possibility of requiring all visitors to Naso territory be approved by the king in advance. Third is the fact that the young Rey Alexis has been in meetings with rich developer members of the international hydroelectric consortium EPM, along with politicos. These meetings in the absence of formal action toward the Naso Comarca this past year are a major source of concern. The king has held many Naso community meetings, but his people are ready to see formal filings with the government now that he has enjoyed 15 months as their leader. 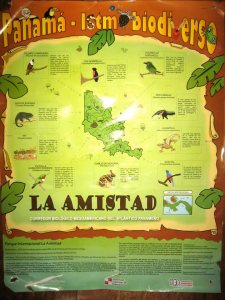 Poster speaking to the amazing biodiversity of the Naso Kingdom

The Naso hope and trust that their confidence in Rey Alexis is properly placed. With a Comarca comes a more formal leadership structure. Many fear the Santana family has never shared power in the manner of Panama’s six indigenous tribes which govern under the Comarca system, rather than a monarchy. They worry, could the young king’s advisers be suggesting he put the Santana family above the needs of the Naso tribe? The leaders I’ve spoken to are confident that those flying the flags of profit are offering their young king untold riches in exchange for an agreement for future projects in Naso territory. Two of the proposed projects would result in cultural genocide for the Naso way of life, according to IACHR testimony. The Naso are a shining example of sustainable river conservation and forestry management for all the world. Naso children are among the happiest I have ever encountered in this world, a testimony to the their extraordinary river culture.

The Big River Foundation is working to help create an annual “Naso Rio Fest”, a river festival to raise funds for tribal development in a sustainable manner consistent with the Naso way. This year we are working with Joern Ziegler, Jennifer Long, and Eric Ellman to engage students in Germany, Costa Rica, USA and Panama to create sister city/sister school programs with Naso villages such as Bonjic, Sieykin and Sieyik. These programs will involve the students in social media publicity and fundraising for a Naso River Festival, our documentary film about the Naso, La Amistad eco-tourism opportunities such as Watershed Watch Expeditions, a Naso Cultural Center, and UNESCO biological monitoring programs. For eco-tourism insights, take a look at ODESEN’s new website, developed by Lisa Nelson of Visual Adventures.

This is an exciting time for the Naso. Hopes are high that Rey Alexis will become the most legendary leader in Naso history, taking his place alongside other respected leaders from all over the world, including Central American Chief Urraca, admired for his resistance against Spanish conquistadors, honored on Panamanian coins. Rey Alexis will need much help working against corporations, the new conquistadors, to save the Rio Teribe and Grandmother Water, and to prevail in long-standing battles with cattle and lumber corporations. With success, he will gain autonomy for his people – autonomy enjoyed by every other indigenous tribe in Panama. We wish him well. Sincere thanks to all those lending a helping hand.