Rio Teribe: Update from the Last Kingdom in the Americas

Our favorite river tribe is preparing to petition for legal rights to its ancestral territory. The Naso are the only indigenous tribe in Panama without autonomy. Six other tribes on the isthmus have been granted “Comarca” status that provides for self-governance. The Naso are the smallest tribe in Panama. Their 11 communities are located where the Rio Teribe flows from International Park La Amistad, an UNESCO World Heritage site shared by Costa Rica & Panama. 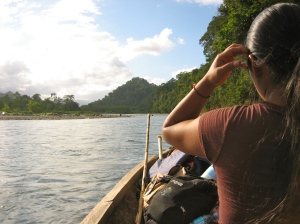 View up the Rio Teribe from the EcoLodge at Wekso

Naso territory has historically been apart from mainstream Latino culture. They’ve enjoyed dozens of peaceful generations, even after Spanish conquistadors arrived in Bocas del Toro 500 years ago. In recent decades, however, encroachment has become a problem. Last year a multi-national hydroelectric consortium installed a bridge and the first road into their territory, from El Silencio to the Naso community of Bonjic. Now dynamite is blasting a 2-mile tunnel where the once pristine river, the Rio Bonjic, flows into the Rio Teribe. The face of the consortium is EPM based in Medellin, Colombia.

These new conquistadors have created grave concerns for the Naso’s democratic monarchy. All candidates to lead the kingdom come from the Santana family. King Tito Santana was deposed after authorizing the Bonjic project against the wishes of a supermajority of his people. Tito lived in exile after King Valentin was elected to replace him. Panama’s National Assembly refused to recognize the new king while the controversial hydroelectric project advanced. The government finally recognized the subsequent election that led to the coronation of King Reynaldo Alexis Santana in 2012.

Rey Alexis stated in a recent interview that his top objectives remain the Naso Comarca and the cancellation of two additional hydroelectric projects planned for his people’s ancestral territory. It may be too late to save the Rio Bonjic, but the hydroelectric consortium covets the Naso Watershed and now has a proverbial “foot in the door”. This threat to the Rio Teribe, along with ever accelerating logging and cattle grazing by squatters has the issue of autonomy burning in the hearts and minds of this sustainable river society. They do not want outsiders bringing roads, bridges, heavy equipment, cars, damns, dynamite, tunnels, and high voltage transmission cables into their territory.

The Naso live off-the-grid and use the river as a highway, making bamboo rafts to take organic produce from community farms downriver to market.  They want to maintain the river’s health because it is central to their culture, and navigation requires flow sufficient for water taxis with outboard motors that return them upriver to their communities. They are fighting against initiatives that would kill their river teaming with life and lead to cultural genocide.  Territorial autonomous rule must be obtained to protect their way of life. They are fighting for their mythical goddess Tjer Di, “Grandmother Water”, whose water flows in their river nurturing Pachamama, “Mother Earth”, who nurtures all life.

Tribal leader Adolfo Villagra recently returned from a visit to the Inter-American Commission on Human Rights (IACHR) in Washington D.C.  He learned that Panama’s National Assembly filed a written response to his tribe’s petition stating that the issue of a Naso Comarca was in first debate, the initial legislative step required for the Naso to receive the level of autonomy granted to every other indigenous tribe in Panama. Sr. Villagra has been unable to find evidence that this is true. He and many in the tribe are frustrated by the fact that no legal action has commenced on the Naso Comarca initiative. A Naso Assembly meeting is set for March 30 when leaders in the community expect a written petition will be signed by the King for immediate presentation to Panama’s National Assembly for the next legislative cycle.

Several attorneys and environmental nonprofit organizations such as the Big River Foundation are assisting the Naso. An award-winning documentary film crew is set to begin production in May to share the plight of this river society as it battles corporations seeking to fly the flags of profit and environmental degradation in their pristine watershed. We’ll post the trailer here as soon as it is available. In the meantime, we’re looking for help raising funds for this important documentary about the myth of “clean energy” that kills rivers, the veins of the earth, and river cultures.  The Naso enjoy broad support in Panama, Costa Rica, and with the United Nations. We must, however, turn this consensus into action.

The film will tell the story of the Naso’s noble struggle in their own words and by contrasting “before” and “after” images on the Rio Bonjic, a tributary to their sacred river, scenes of children playing in the villages with the sounds of heavy equipment and dynamite, water splashing from a Naso family’s raft contrasted with the reservoir on the Ngobe-Bugle’s Rio Changuinola severely limiting the flow where it joins the Rio Teribe at El Silencio, one river teaming with fish and freshwater shrimp while the other is comparatively lifeless, the Naso portaging the shallows with great difficulty in their longboats alongside the image of the hydroelectric sculpture at La Fortuna with a fist squeezing the river to emit a lightening bolt. To lend a hand, please write to: SaveTheRioTeribe@BigRiverFoundation.org or donate at our website http://www.BigRiverFoundation.org 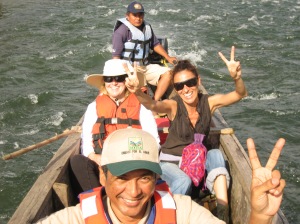 Ecotour to Naso communities upriver on the Rio Teribe.

2 Responses to Rio Teribe: Update from the Last Kingdom in the Americas