Forty feet above a tree-fringed lake near Laredo Community College, birds cart-wheeling behind him, fish leaping from the water below, Pro 8 News anchor Tim Gutierrez looks into the camera and muses “this is something that 98% of Laredoans know nothing about.”

Tim’s surprised tone reveals he’s one more person who never dreamed there were three small lakes, miles of shady trails and 200 acres of park land at the geographic center of Laredo and Nuevo Laredo.

Hemmed by the campus to the north, Kansas City Southern on the east, and a dogleg left turn of the river on the southwest, the long-proposed but little noticed project area is the city’s largest swath of undeveloped land.  Together with equivalent green space in Mexico, a stone’s throw across the Rio Grande/Rio Bravo, it represents a potential international peace park, suggests Lamar Bruni Vergara Environmental Science Center Director Tom Miller.

Great cities have great parks.   New York has Central Park.  San Francisco has Golden Gate.  Houston has Memorial.  Texas already has a Big Bend Park — with a sister park in Mexico — so perhaps it’s not too far-fetched to imagine Laredo’s own version, Riverbend Park, a natural oasis of Hackberry, Mesquite and Montezuma Bald Cypress, to alter the social chemistry of one of the world’s most conflict-prone borders. 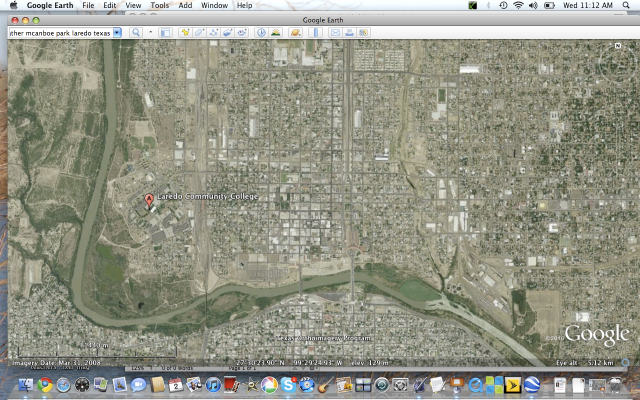 In the midst of all that Mexico is experiencing.  Considering Laredo’s need for positive press.  Factoring in the city’s need for green space, nature sites where families can relax in nature, or fish or hike…. what’s it worth to have an urban oasis smack dab in the two cities’s centers?

TAMIU President Ray Kerk has understood the vision since the U.S. Army Corps of Engineers first proposed it as a joint project with the City of Laredo over a decade ago.

“It’s another Laredo project that never seemed to aterrizar.” A doctor of linguistics, he uses the Spanish term for landing a plane, explaining it also applies to classic city proposals like Rio Vega, downtown redevelopment and a weir that never seem to touchdown.

On a fast track to construction with fully realized designs and a $4MM budget,“Everything came to a screaming halt after 9/11,” says Tom Miller, who was Laredo Community College’s liaison on the project before it got sidetracked.

Without funds to dredge the lakes, restore flow, replace invasive Salt Cedar with majestic Cypress … and everything else that millions of government funds would pay for … the project languished.

But the opportunity never went away. What was special about Riverbend Park from the start — it’s extensive vegetation, lakes left behind by a defunct sand and gravel operation, fauna that calls the place home — is still there, as close as ever to downtown, a place where no one expected it.  Open for the public to enjoy.

That few do, that the place remains a secret to all but those who worked on it, is hardly a surprise.  It’s on the river after all.  The terrible scary river that everyone has an opinion about but which few verify.  A pair of confusing signs greet those who follow their curiosity.

“Public Access” invites the first one (Enter Here!).  “No Unauthorized Vehicles” gives you pause (All Ye Who Dare!)

No surprise then that visitation is limited to El Cuatro neighborhood kids who fish there, and the Laredo Community College interns who harvest fresh water shrimp to feed the exhibits at Tom Miller’s Environmental Science Center.  Otherwise this oasis is forgotten.

But just like Brigadoon, the mythical Scottish town that magically appears and disappears every hundred years, Riverbend Park seems to be re-materializing in the public mind.

District 3 Council Member Perez, a life-long resident of Laredo, visited the site recently.  Drawing on all the experience and appreciation for nature that his Masters Degree in Environmental Science conveys, he had this assessment. “Wow!”

Riazul Mia, the City’s Director of Environmental Services, has been the continuous presence in keeping the park plan alive, directing clean-ups, moving ahead when money and city resources allowed.  As far as he’s concerned, the park’s resource value is ready to be tapped by volunteer and in-house resources.

The Big River Foundation is proudly answering this call, building on the parks potential for experiential education programs and coordinating new initiatives such as habitat restoration.

Eric Ellman is Executive Director of the Big River Foundation, a 501-c-3 dedicated to reconnecting people with their rivers.  Anyone interested in trail-building, clean-up or other activities at Riverbend Park are invited to call him at 956.209.1879.